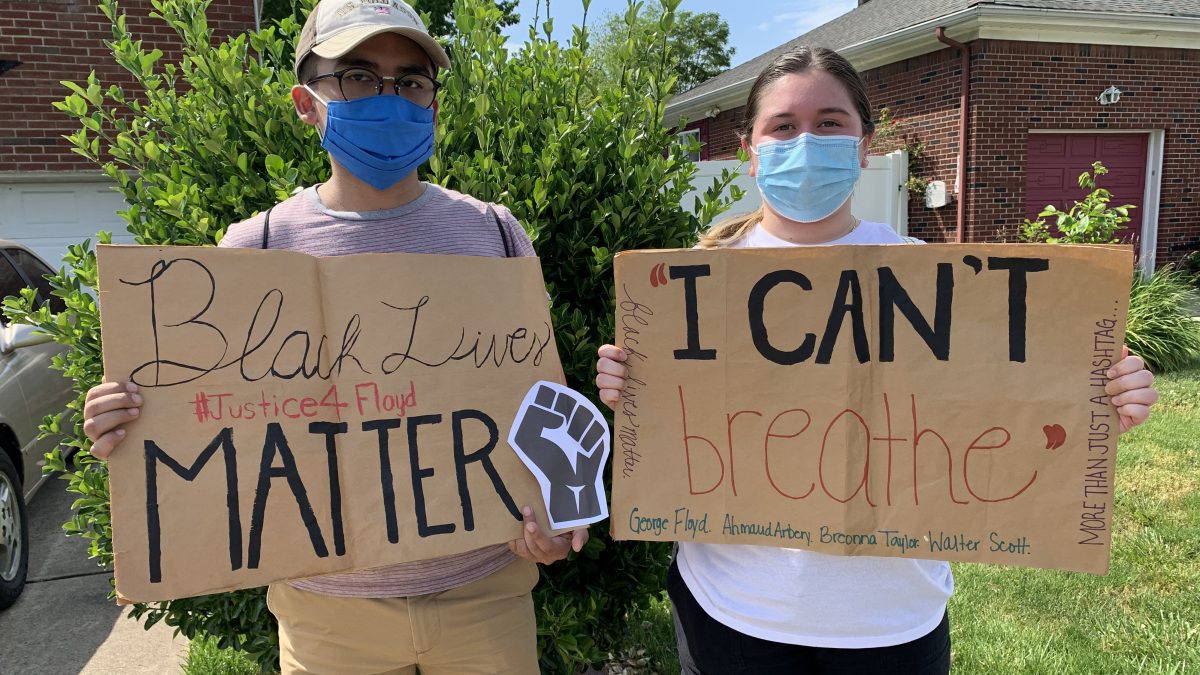 Growing up in a small town is nothing like how it’s portrayed in movies. No, we don’t know everybody’s names, and we don’t keep our doors unlocked at night. But one thing is for sure: when it comes to justice, our little community proved to be stronger, and more united, than ever.

Yesterday,  Carteret, NJ held its first protest on behalf of the Black Lives Matter movement. I had the opportunity to attend this event, alongside friends and family that I have grown up with in my small hometown. There were some people there I haven’t seen since high school—most people there I didn’t even know. Yet we all smiled, all yelled, and all marched like we’ve been doing it together our whole lives. 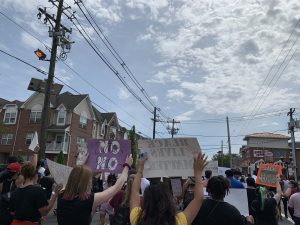 “No Justice, No Peace,” was a popular chant during the protest.

What was most incredible about attending the first protest ever held in our town, was getting to be a part of something alongside your neighbors. Carteret is so small compared to its surrounding towns (Woodbridge, Elizabeth, Rahway, Edison, etc.), so usually larger events like these are hosted elsewhere. However, Carteret had such an amazing turnout, I almost forgot that our town has more than 20,000 residents—that is, until the protest began.

I first heard about this protest through social media. Three girls that I had gone to high school with had gotten the official “okay” to organize this event, and it was taking off fast. I took it upon myself to spread the word, as well, by posting on social media and telling my friends, family, and coworkers. 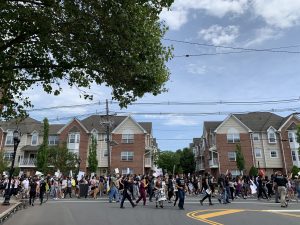 The protest led all the way to the fire department, which is across town from our starting point.

Black Lives Matter (BLM) has been such a critical movement for the past several years, but with the most recent death of George Floyd, the BLM movement has taken off in a series of protests around the globe. I was incredibly moved that Carteret got to be a part of a worldwide movement, which is one reason I found it so crucial to attend. Carteret’s name is seldom heard, yet many of my friends and I agree: Carteret is one prime example of why the topic of police brutality is so important, and why our community needed to address racial injustice.

In 2017, black teenager Monte Stewart was beaten and hospitalized by Carteret Police Officer Joseph Reiman. Officer Reiman was found not guilty in this incident. Many speculate it’s because his brother, Dan Reiman, is Carteret’s Mayor.

Many of the protestors questioned Mayor Reinman’s actions, and were asking why he allowed his brother to continue his work on the police force (he was even promoted to detective). If you think police brutality doesn’t happen in small towns, think again. This was another huge factor of why I wanted to attend. 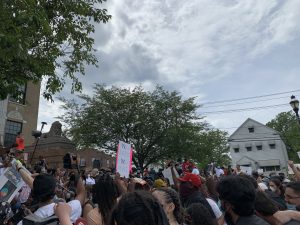 Topics like these are ones that need to be addressed, which is what, I believe, the primary goal of today’s march was. We took a long route across town to stop at a few key places: the police department, the fire department, and City Hall. At City Hall, we all took a knee for those who have lost their lives to police brutality; we raised our fists; we said their names. The entire experience was intense, invigorating, and emotional. It was a moment that haunts me even now, to witness people crying out of sadness, anger, or fear on behalf of those who died at the hands of those who are supposed to protect us.

This was the first ever protest that I have had the opportunity to attend, and I am so grateful for the experience I got to have. Getting to march in my hometown, on my streets, gave me the strength and power to speak up about BLM and the police brutality that has happened right under our noses. This is a worldwide initiative, and the world now officially knows Carteret’s name. 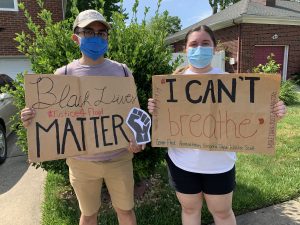 Me (right) and my friend, Joe, with our signs for the protest.

Being able to protest today was just one of the many ways that I got to fight for peace, and fight for what’s inherently right. Racism was and never will be a political debate. Human rights isn’t a debate.

Since George Floyd’s death, there have been 29 other victims of police brutality in only 10 days. This issue will continue to persist if we don’t come together to fight it. After the protests began to receive global attention, George Floyd’s arresting officers have all been charged with second degree murder, and Breonna Taylor (a black woman who died after police shot her in her sleep) has had her case reopened by the FBI. In other words: protesting works, and so far it has delivered results in only 10 days.

If you are unable to protest, I encourage you to please take some time to sign the petitions, donate to BLM organizations and bail-out funding, and to text or call your local community leaders. You can find a link to these resources here. Most importantly, vote! Vote for change; vote for peace; vote for justice.

About the Author: Paige Fleming is an intern at the Institute and a rising senior at Kean University studying communications.