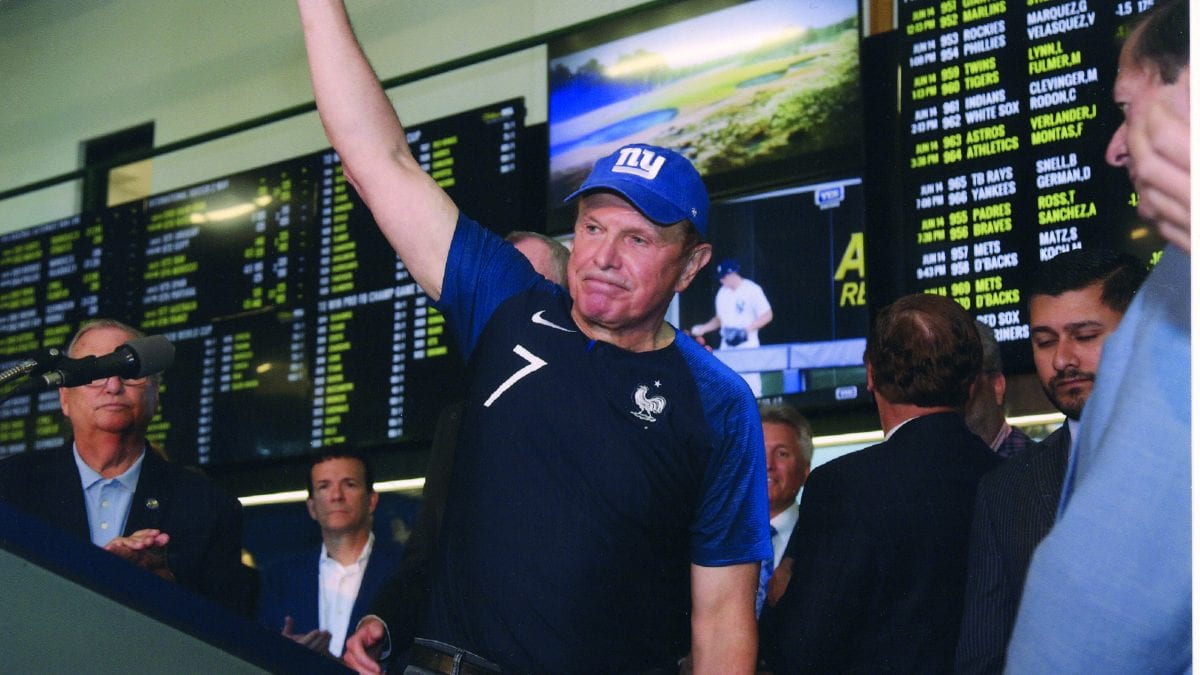 by Senator Lesniak May 15, 2019
Featured, From Our President

Today, we celebrate the first anniversary of the Supreme Court decision declaring the federal ban on sports betting, PASPA, unconstitutional. My journey to bring legal sports betting to America started eleven years earlier on March 30, 2007 when my law partner, colleague and friend, Rudy Garcia, was arrested for placing sports bets for himself and a few friends at an organized crime run operation in Monmouth County that netted $35 million a year. The FBI thought Rudy was a runner for the operation. The only thing Rudy was running was a few bets he was placing for a handful of friends. The charges were dropped, but Rudy suffered for nearly a year for doing something he could have done legally in Las Vegas.

One year ago, on May 14, 2018, my fight to bring legal sports betting to America was vindicated by a U. S. Supreme Court decision declaring the federal ban on sports betting (PASPA) unconstitutional. How sweet it was, and how sweet it is, as legal sports betting has generated $billions of wagers and brought life and jobs back to New Jersey casinos and racetracks. Those $billions that were going to organized crime run sports betting operations and offshore internet gaming sites now are generating revenue for New Jersey and bringing back and saving jobs at Atlantic City casinos and Monmouth Park and The Meadowlands Racetracks.

When I started my quest to overturn PASPA and give New Jersey the benefits from sports betting enjoyed by Las Vegas, the odds were guessed by legal “experts” to be 5000 – 1. I had to overcome opposition from New Jersey casinos which were taking orders from their Nevada based headquarters, Governor Christie who tried to torpedo my challenge three times before he came on board, the NFL, NBA, MLB, NHL, NCAA and the United States Department of Justice. But I had powerful allies as well fighting alongside me, Dennis Drazin, CEO of Monmouth Racetrack and Joe Brennan, CEO of IMEGA internet gaming, Senate President Steve Sweeney, Senate Deputy Minority Leader Joe Kyrillos and Assembly Tourist and Gaming Committee Chairmen Ralph Caputo.

I also had the voters of New Jersey on my side which approved the Referendum I sponsored to amend the New Jersey Constitution to allow sports betting by a 2 -1 margin. And I had Rudy Garcia cheering for me every step of the way.

Rudy was the catalyst for my sports betting quest. He was arrested in an FBI sting call Operation Thunderbird innocently, so he thought, placing sports bets. Charges were ultimately dropped, but Rudy had to go through hell for doing what is done every day in Las Vegas. That got my Polish up and led to victory years later, but not until suffering eight setbacks in federal court. Today, on the 1st Anniversary of our victory, I’ll give a toast of Veuve Clicquot to Rudy and my allies along the way and say, Sto Lat!