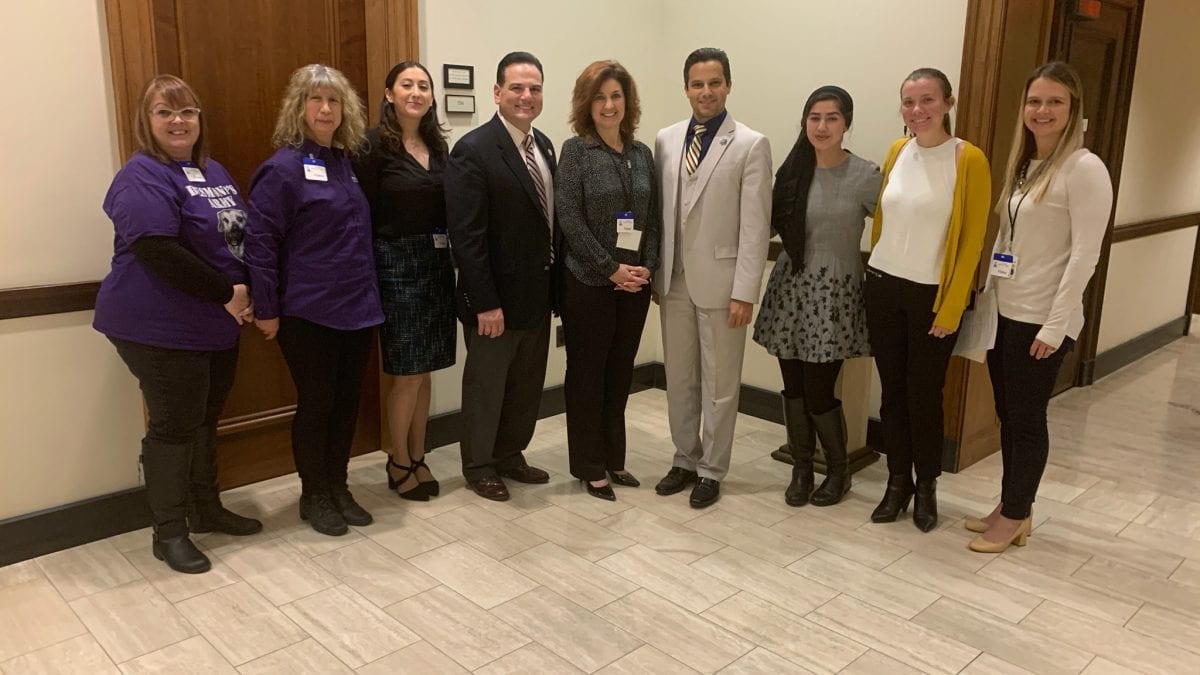 On Monday, November 18, 2019, Desmond’s Law was released from The Senate Judiciary Committee, unanimously in an 11/11 vote. Below are the testimonies of those who spoke at the committee meeting.

Good Afternoon, I am Robin Zilla Cannamela, President of Desmond’s Army Animal Law Advocates in Ct. Thank You for allowing me to speak here today on Desmonds Bill A4840/S3322.

He dragged the screaming dog down the trailer park road beating him around the head and neck while repeatedly slamming him to the ground. It was 2014 in Colorado Springs, Colorado. Eye witnesses called the police and he was arrested. He claimed he was breaking up a non- existent dog fight and he was let go after paying a fine. His name is Devlin Kelly.

Three years later Mr. Kelly showed up at a Baptist church In Texas with a gun and killed 26 people half of whom were children and wounded 20.

In the wake of such mass shootings one question always surfaces. Were there warning signs?

Ample psychological studies have indicated a strong link between animal abuse and future violent behavior. When the abuse is “up close and personal”—hands-on violence toward animals–the link is practically irrefutable. Our country is faced with a rash of mass shootings from venues that range from schools to churches to malls and concerts. And they are accelerating. Apparently no one is safe. We wring our collective hands and send thoughts and prayers.

Depending on how you parse the data anywhere from 43% to 80% of school shooters started with animal cruelty. In fact between 1997 and 2001 of the seven school shootings that took place across the country, all involved boys who had previously committed acts of direct animal cruelty. The Pearl High School shooter, Luke Woodham, tortured his own dog to death by beating him, placing him in a plastic bag and setting him on fire. There were no repercussions and Luke went on to kill his Mom, two classmates and injuring seven other kids. The list goes on and on.

Dedicated advocates and some brave legislators in the State of Connecticut decided to try something out of the ordinary and introduce legislation that recognized and took seriously the link between animal cruelty and future violent behavior. PA 16 -30 known as “Desmond’s Law” was enacted in Oct of 2016. The first law of its kind in the nation. This law puts a pro bono lawyer or a law student under the supervision of a law professor in court to advocate for justice for the dog or cat victim of egregious abuse. Recently the court themselves expanded the advocate to a case involving terrible cruelty to rabbits. We are now seeking the language of the law to include “any animal at the judges discretion”.

Over-worked prosecutors now have an additional resource to track down all the relevant information in these cruelty cases. This is at no extra cost to the state. In the past only 18% of cruelty cases ended up guilty with consequences. The rest were dismissed or in a particularly disturbing scenario given a diversionary program known as Accelerated rehabilitation (AR). This involves a slap on the wrist with mild probation and your record is ERASED after completing the probationary period. That is correct. You torture and strangle a dog to death…this is what happened in Desmond’s case…..you receive AR and your record is erased. So if I am looking to hire a home sitter, for example, and Alex Wullaert, Desmond’s killer is in that business, I have no way of knowing that he has this extremely violent background.

To date, Desmond’s Law has put animal advocates in court in over 70 cases. Preliminary empirical evidence is very clear. The courts are taking animal cruelty much more seriously. There is no “get out of jail free’ card any more. The judges are welcoming the advocates, the District Attorneys are using the data collected by the advocates to bring justice to these egregious cruelty cases, and the nation is taking notice.

Desmond’s Law acknowledges animal cruelty as a precursor to social violent behavior and has become a necessity in this disturbing climate. New Jersey now has the opportunity to become a forerunner heeding the warning signs with DESMOND’S Law.

Emily was a guest on the Senator Ray Show to speak about Desmond’s Law back in January 2019.

My name is Emily Bank and I am a recent graduate of Rutgers Law School Newark, the founder and former president of the school’s Student Animal Legal Defense Fund chapter, and a newly admitted member of the New Jersey Bar.

It is with great excitement, hope, and pride that I write to you today, asking you to pass Bill S3322 into law in New Jersey. Bill S3322, which is modeled after Connecticut’s enacted Desmond’s Law, will allow for pro-bono attorneys and law students to advocate for the best interest of the animal in civil and criminal proceedings relating to animal cruelty.

Before I even applied to law school, I read a book called Animals, Property, and the Law. This book introduced the concept of animals as property to me, because I, like most other New Jersey residents sharing our homes with animals, consider my dog to be a member of my family.

However, the book, written by Rutgers Law Professor Gary Francione, highlighted the fact that the law does not reflect the way most of us view our pets. The book argues that the current legal standard of animal welfare does not and cannot establish fights for animals. As long as they are viewed as property, animals will be subject to suffering for the social and economic benefit of human beings.

Although this book was written in 1995, I believe it still holds true today. Which is why Desmond’s bill needs to become Desmond’s law in New Jersey. We need to update the law to reflect the way we all feel about our pets – as members of our family.

It is important to know what happened to Desmond as his story is horrific but tragically not unique. Desmond was adopted from a shelter by a woman who, unbeknownst to shelter staff, was a victim of domestic abuse. After becoming pregnant, Desmond’s owner returned him to the shelter, where she thought he would be safest while she underwent serious legal proceedings against her former boyfriend and abuser. However, her former partner found and adopted Desmond and continued to take out his rage and abusive behavior on the innocent animal.

Desmond was beaten, starved, and ultimately strangled to death by the hands of his very own so- called rescuer. His emaciated and bruised body was found in a garbage bag in the woods.

Many people hearing this story might assume that the abuser was sentenced to time in prison or even a lifetime-ban from owning another animal? Certainly, at the very least a heavy fine? Nope.

The Connecticut Court decided he should get the legal equivalent of a slap on the wrist in the form of accelerated rehabilitation. His charges were dismissed, and the conviction was wiped from his record. When I heard this, I felt as sad and angry as I’m sure many of you reading this are feeling right about it now. Desmond’s Law is aimed to prevent future abusers from receiving the same hollow punishment that Desmond’s killer did.

Desmond’s Law and the Community:

Desmond’s female owner could have easily suffered the same fate as her dog. Often abusers abuse animals because they can get away with it. Since animals cannot speak and crimes against them are not punished as severely as those against other humans, abusers often first “experiment” their acts of abuse on animals. The argument is not necessarily that these crimes should be treated equally, rather we should be paying greater attention to abuse against the innocent that must suffer in silence. However, we cannot deny the link between crimes committed against animals to crimes later committed against humans.

Because of the nature of the bill in allowing for the judge’s discretion, the crime will likely have to be a very substantial act. One so heinous that regardless of whether the victim is an animal or a person, the perpetrator deserves to be prosecuted. By allowing for the court’s discretion, the issue will be one that the court determines has a significant effect on the health, safety, and peacefulness of the community – one that at the very least needs to be investigated further.

Additionally, by enacting this legislation, New Jersey will be supporting a wider movement in the criminal justice system that emphasizes the importance of giving victims of crimes a stronger voice and unqualified support.

Possibly most intriguing to me about this bill is that it would serve as a unique opportunity for law students to gain first-hand experience working within the court system. As a recent graduate of Rutgers Law School, I can say with confidence that there is no class that compares to the clinical experience I had in school. Anything we can do to increase practical knowledge and experience for students will be beneficial in preparing them to eventually serve the community in a legal capacity. I know many current and former students who have expressed interest in this bill in order to gain the experience and knowledge that comes with prosecuting civil and criminal cases.

Passing this bill would be a victory for the law students, the animals, and the community. Students would benefit from the first-hand experience and practical knowledge only learned through action. The animals would benefit through the added protection given to them through appointed advocates. And the community would benefit both from the increased monitoring of abusers and the increased training of lawyers. The bill would strengthen the already existing law and help support the existing New Jersey animal cruelty code. Thank you for your time.