It’s About Protecting Lives, It Shouldn’t Be That Hard?

There are 72 jurisdictions where being gay or trans is criminalized. Punishments can range from fines to death in some cases.

Under Secretary John Kerry, who was the Secretary of State from 2013 to 2017, the position within the State Department to protect the human rights of all LGBTI people globally was created. This position was called the Special Envoy for the Human Rights of LGBTI Persons.

The Special Envoy’s job is to provide solutions and strategies to prevent the criminalization, violence, and discrimination against LGBTI persons globally. As well as countermeasures to fight for their protection. The information and research will aid the United States agencies to address these issues. The position has been vacant since 2017, as no appointment has been made. It is no secret that the United States Department of State has not been friendly with LGBTI people under the guidance of Secretary Mike Pompeo and President Donald Trump, from opposing the Equality Act to banning transgender individuals from serving in the military.

Just last year, on April 3rd, the government of Brunie implemented the final part of the Syariah Penal Code Order 2013 which made changes to criminalize “same-sex intimacy between women” and allowed death by stoning for “same-sex intimacy between men”. While the Sultan has said he will not enforce the death penalty days before the implementation, this was only to quench the fire received from the international community. However, the law still exists, with or without actively using the death penalty.

In Indonesia, a gay couple, who were not named, were ripped out of their home where they were publicly craned and arrested. One of the people who watched the public event, a gay rights activist Hartoyo told a reporter of the mistreatment he faced years before with his partner. He said, “The police urinated on my head and beat the two of us up, we were treated like animals”. This was all before homosexuality became illegal, Hartoyo said he was lucky it happened before.

While 29 countries including the United States have legalized gay marriage, 6 countries have implemented the death penalty as a punishment for homosexuality and have enforced the punishment. Those countries are Iran, Northern Nigeria, Saudi Arabia, Somalia, and Yemen.

In January there were 15 people arrested in Nigeria at a party. Deputy Commander-General Shehu Tasi’u Is’haq said, “ We arrested and transferred the errant students to our correctional center at our headquarters in Sharada. While at our correctional center, they will be re-oriented, and at the close of the day, they will desist from their waywardness and turn a new leaf. Islam is opposed to same-sex partners, which is a taboo. As an institution, our responsibility is to correct youth, who are going astray, reminding them that devout Muslims forbid homosexual acts, which will not be tolerated.”

The lack of protection can cause harm not only from the government but also from the people in the country. If there are no protections for LGBTI individuals, private citizens will have no repercussions for committing hate crimes against them. Rania, a member of a Tunisian LGBTI organization called Mawajoudin told The New Arab, “Across MENA (the Middle East and North Africa) queer people face legal punishment so I think that we have to be aware to not confuse hate speech with freedom of speech because when you are telling your followers to ‘out’ queer people on social media it becomes about harming and attacking and killing queer people using these platforms.”

I ask the congressional delegation from New Jersey to call upon President Biden’s Secretary of State pick Antony Bliken to fill the positions of the Special Envoy with an LGBTI advocate who has experience in diplomacy. 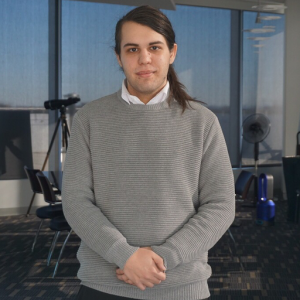 Abel is a senior at Kean University majoring in Political Science and the Administrative Assistant at the Lesniak Institute for American Leadership. He is a passionate advocate on and off-campus for Human Rights and the LGBTQ community.