Help end the unnecessary and cruel confinement of mother pigs and baby calves.

cages so small the pigs are nearly immobilized. They can’t even turn around or take more than a step forward or backward. Because of the lack of movement, their muscles and bones deteriorate. These intelligent animals are denied any mental stimulation. Many become neurotic and engage in repetitive coping behaviors, such as constantly biting the metal bars in front of them. Veal crates immobilize baby calves in similar ways. Within days or even hours of birth, calves raised for veal are taken away from their mothers and locked in cages so tiny the calves can barely move. S1298/A1970 would ban cruel gestation and veal crates in New Jersey and allow mother pigs and baby calves enough space to turn around freely, lie down, stand up and fully extend their limbs.

Perpetual confinement in gestation crates is so cruel that ten U.S. states, Canada and the European Union have outlawed this abuse. Smithfield Foods, the nation’s largest pig producer, and Hormel Foods, maker of SPAM, are reducing their use of gestation crates. McDonald’s, Burger King, Wendy’s, Carl’s Jr., Hardee’s, Denny’s, Cracker Barrel, Compass Group, Tim Hortons, Sonic, Kroger, Kraft Foods and Safeway are just some of the companies that are prohibiting crates in their supply chains. It's time for New Jersey to take action.

Your donation will be used to support the advocacy effort to ban Gestation Crates in NJ.

Donate to save countless pigs from the cruelty of gestation crates.

Ask your one Senator and two Assembly Members to co-sponsor this bill. We’ve prepared a sample email for you to use, but we highly encourage you to modify it to make it more personal.

Note: If your representative is already sponsoring the bill, make sure to thank them for their sponsorship rather than asking them to sponsor it.

Sample Email to your Legislator

Subject line: A note from your constituent - please support S1298/A1970 to ban cruel confinement of baby calves and gestating pigs

As your constituent, I strongly encourage you to cosponsor and support S1298/A1970, which would ban the cruel confinement of baby calves and gestating pigs.

We are just asking that these animals not be confined to a space so small that prevents the animal from lying down, standing up, fully extending the animal’s limbs, or turning around freely.

I ask that you please stand against animal abuse and prohibit the cruel practice of immobilizing mother pigs and baby calves in New Jersey by co-sponsoring S1298/A1970.

Thank you for your consideration.

After emailing your Senator and two Assembly Members, be sure to follow up with their offices with a polite phone call. Calling takes less than two minutes, and it’s really easy! We’ve prepared a sample script for you to use but please feel free to modify it to make it more personal.

Hi, my name is _____, and I’m a New Jersey resident from __(city)__. I’m following up on an email I sent earlier about requesting Assemblyperson/Senator _________ to please co-sponsor S1298/A1970. This is the bill to ban the cruel confinement of pigs and veal calves in New Jersey. Thank you. 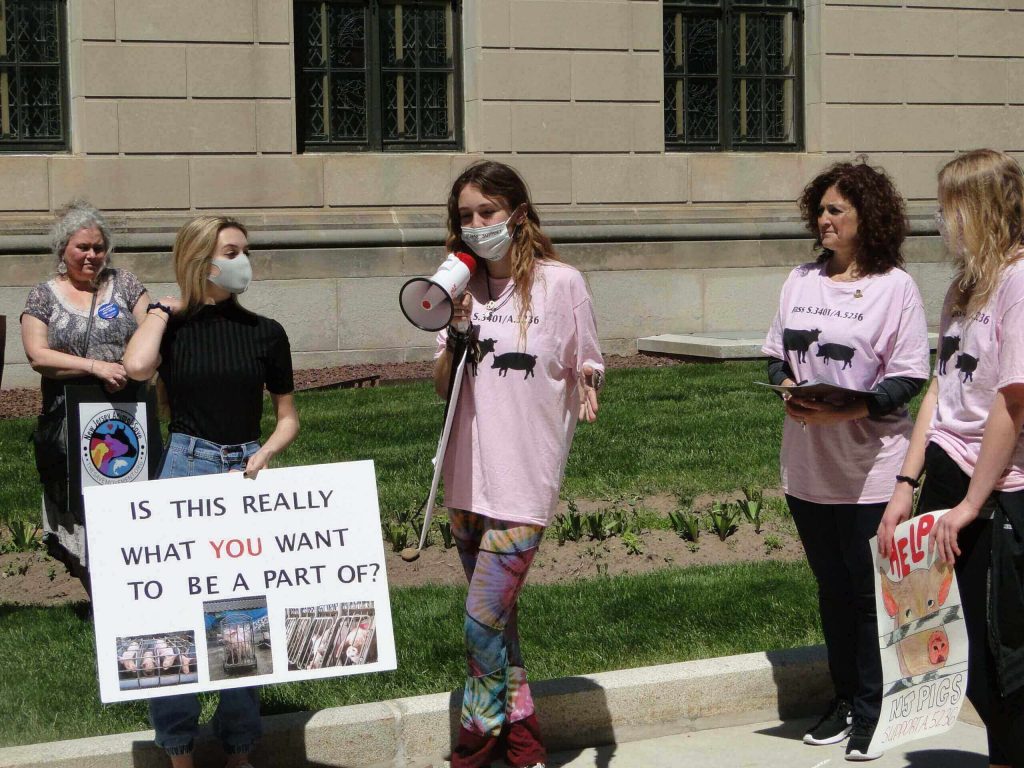